The endoscopic treatment of the carpal tunnel syndrome (which is now applicable to most cases, stays clear from opening the hand palm and allows optimal recovery).

Several options can be taken according to the results of the EMG : – Either a cortisone injection into the wrist which most frequently can delay the operations by a few months or a few years thus entailing a transitory reduction of the inflammation of the nerve
– Or a wrist splint which put into place at night allows to reduce the numbness and tingling. 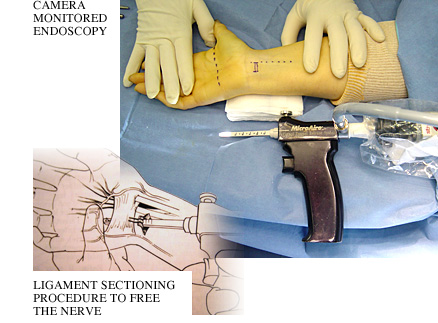 Input of the camera in the carpal tunnel :

Centre de Chirurgie Ostéo-Articulaire (CCO) - Polyclinique Saint-Privat - Rue de la Margeride -34760 Boujan-sur-Libron
We use cookies to ensure you the best experience on our website. If you continue to use it, we will consider that you accept the use of cookies.OkRead more